🖊 The appeal and advantages of being a BNS Environment Artist
🖊 Just how much thought goes into our work?
🖊 We asked a mid-career hire about their experience with us!

The appeal and advantages of being a BNS Environment Artist

Environment creation at BNS requires a wide range of knowledge that spans modeling, shaders, lighting, post-processing, and physical simulations. They must also be capable of creating large game maps, as well as manage the large number of assets that go into them. This is why the Environment Artist position is thought to evolve the fastest in terms of technology and methods. People in this position will need to learn about new technology every day, but this means their work can be that much more rewarding.
The work done by Environment Artists has a high impact on a game and its world, and encompasses gimmicks that contribute to core gameplay. As a result artists also need an understanding of video games, as well as the artistic sense to create them.
BNS makes games across a variety of genres, including sci-fi, fantasy, fighting, military, and idol games.
We also choose visual styles that match the worlds of these games, whether that’s realistic, dramatic, deformed, cel-shaded, etc.
To bring these games to life, artists have to work in collaboration with the various sections in charge of other parts of the game, such as the story and level design.
Since it is difficult to become capable in all of these skills through self-study, the studio trains its talent in steps, with each production sharing the technologies they’ve created and holding workshops.
For the betterment of the Studio, artists are also assigned to projects depending on the career path they wish to follow, allowing them to focus on increasing their prowess with a single art style or technology, gain experience across a large number of projects, or pursue a position as an art director.

Just how much thought goes into our work? 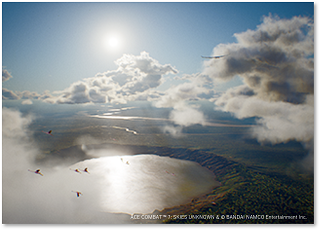 Much effort was put into “ACE COMBAT7” to achieve its vast and realistic “living sky”.
The core gameplay of the “ACE COMBAT” series of combat flight simulation games is allowing players to fly around freely in a vastly spacious sky.
This makes the sky, and how it’s represented visually, important to the game.
The appearance of the atmosphere and clouds that make up the sky can show information such as time of day or weather, and that alone is capable of setting the mood for the overall game.
For this reason, we researched the mechanisms behind the formation of atmosphere and clouds, interviewed fighter pilots on their experience with flying through clouds, and tried to understand everything we could about the sky.
We then started developing the technology to recreate this in-game, working with engineers to control the shadows and shapes of clouds to make them look more three-dimensional, add lighting effects, and adjust rendering methods.
This resulted in many players calling ”ACE COMBAT7: SKIES UNKNOWN” an “experience” due to how the sky was recreated, bringing flying games to a new dimension.

Of course, this doesn’t mean that the cities and mountains underneath the player are not important as well.
The various parts are divvied up between team members, such as creation of the overall concept for a locale and what objects go where, generating the topology for maps, creating and placing buildings, distributing massive amounts of greenery, lighting settings, and more.
Everyone then submits what they’ve made to end up with the final map.

Backgrounds also control the level design of a game. This is related to environmental storytelling, a storytelling method that has gained much attention recently.
For example, we could relay that a large crater used to be teeming with life if we place ruined buildings around it. Or we could get players interested in where a ship carrying lumber goes if we placed it in a river next to an overgrown jungle that is being cut down.
Advances in a game’s visual expression enables us to use this storytelling method, bringing the game world to life.
Great things are expected of Environment Artists in this area of game development in the future.

Looking at: Tales of ARISE 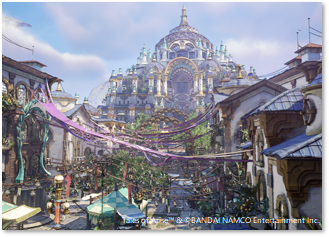 By having more realistic lighting and texture in Tales of ARISE, we were able to create environments that had greater presence than our previous titles.

Our Render Programmers and TAs also worked carefully in order to preserve the soft and vibrant colors the Tales of series is known for. They embraced a rustic and bright style for the game’s environments, and hopefully this will mark a new standard for environment design in the Tales of series.

Environments also play a key part in how well the final gameplay feels. Game paths and the presentation of gameplay gimmicks were fine-tuned either by request from Planners or through playtesting by artists.

Tales of ARISE overcame the challenge of creating a new visual style through the help of many people. We hope that players will enjoy immersing themselves in the world of Tales Of, even if only for a brief moment. 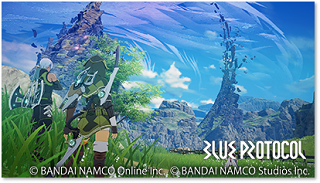 BLUE PROTOCOL is an online action RPG where players can go on adventures with their friends in an anime-style world.

One of our goals with BLUE PROTOCOL was for players to feel the massive scale of the game’s world and to let them taste the thrill of adventure. With this in mind, we put much thought into the traditions and cultures of each region from the design phase and worked hard to flesh out the minute details of the world, all to deliver an immersive experience for players.

We devised all sorts of ways to make the game world as enjoyable a place to be in as possible. We did this by adding a plethora of minute details, like street lights and windows in towns and fields that light up depending on the ever-changing time of day, or a map effect that gives the impression of fireflies flying around at night.

Bafaria is an integral part of the BLUE PROTOCOL world, and the ruins of this civilization are all placed in intricately designed locations that were created to be breathtakingly scenic. We also discuss what would be the best designs for maps of areas inhabited by the other cultures in the game. We try to incorporate the ideas of every team member as we work, with the goal of creating a world where just walking around is by itself enjoyable.

Although the environments use physics-based shading, we put a lot of thought into using lighting and post-processing to make the toon-shaded characters stand out and to give the final in-game output a sense of coherence.

We asked a mid-career hire about their experience with us!

Why did you join BNS?

I had a chance to work on a project with BNS before I joined the company. The people and work environment were nice, and everyone had a very professional stance on the game they were developing. That made me want to join the company full-time.

What was the best part after you joined?

I was put in an environment that gave me many opportunities to try things outside of my job description. I learned a lot from taking these opportunities, which makes me glad I joined the company.

What felt different before and after you joined?

Nothing in particular. Though I already talked about it in length in the previous question, my experience at work didn’t change from when I was working with BNS before I joined the studio, and after I joined.

What’s the team like for the project you’re currently working on?

Everyone is really nice, and the work is fun!

Is there anything you would like to try in the future?

Although the studio already lets me try my hand at a bunch of things, I would like to reach out beyond my job description to further expand my knowledge and technical skill.